The poetry of Tsogdorjiin Bavuudorj occupies a ambiguous position in contemporary Mongolian literature, a position which at once looks backwards into history and outwards into the universe of myriad forms. In some ways, then, his poetic worldview can be seen as an analog for Mongolian culture in the twenty-first century, seeking to acknowledge a nomadic culture and a spirituality which has largely been superceded by a process of western acculturation, while also coming to terms with what it might mean for a poet, an individual, to be part of this society.
Bavuudorj was born in 1969, and came to prominence as a poet at the end of the 1980s, and during the early 1990s, during which time Mongolia was in a position of transformation, opening up to the wider economic and cultural world following the disintegration of the Soviet Union. At this time, the generation immediately preceding his – of the trio O Dashbalbar, G Mend-Ooyo and D Nyamsüren, and of other poets such as Z Tümenjargal and the American educated L Myagmarsüren – was beoming increasingly influential, and these were writers, in the face of Tsedenbal’s hardline political censorship during the 1970s, had turned their concern primarily to expressing love and landscape and the life of people on the land.
But, political pressure notwithstanding, we can also see a clear lineage being drawn in the postwar period, starting with B Yavuuhulan and M Tsedendorj, both of whose poetry exhibits an especial sensitivity towards the relationship between the land and those who live in communion with it. One of Yavuuhulan’s best-loved poems, “Where Was I Born?,” expresses this relationship in a way which is reminiscent of the Mongols’ ancient shamanist literature, but which can also perhaps be read as the poet’s call to his people, that they might acknowledge their deep connection with the elemental world.

This is but one of eleven verses in the poem, but it indicates the way in which Yavuuhulan, whose work and teaching exercised a pofound influence over poets such as Dashbalbar, Mend-Ooyo and Nyamsüren, was thinking about his own position in the world.
These three poets, too, were each clearly a great influence upon Bavuudorj’s poetical thinking. Indeed, there is a picture, taken in the 1990s, of Bavuudorj and Nyamsüren, their arms around each other, leaning into one another, standing, grave-faced, before the snow.covered mountain of Otgontenger. This photograph of these two poets expresses the personal friendship which existed between them, but it also bespeaks a far wider connection between poetry and the shamanic Buddhist spiritual tradition, in whose revival the literary community has played such a central role throughout Mongolia over the last two decades.
We can see in Yavuuhulan’s poetry the idea of this interdependence of the land and human beings, and it is arguable that this is perhaps the most important theme in Bavuudorj’s work. It is no coincidence, after all, that he has been associated throughout his career with the trio of poets mentioned above.
One unusual image which Bavuudorj frequently employs is that of humans changing into grass, and we see this in many of the poems collected in the present volume. One name for poets such as Dashbalbar and Nyamsüren is “grass poets,” indicating their close relationship to the land: Dashbalbar, of course, famously made a name for himself during the 1990s as a politician and campaigner against the reform of legislation regarding private ownership of the land and, as we shall soon see, his work was also full of references to the land in general, and to grass in particular. The influence of such poets on Bavuudorj cannot be overemphasized, but as we shall see it is an influence focussed through the prism of his rather surreal and unusual vision.

Dashbalbar wrote a series of poems about grass, which were subsequently published in his book Gol Us Namuuhan Ursana (1986, translated by Simon Wickham-Smith and published by the Dashbalbar Foundation in 2006 as The River Flows Gently). He treats the grass as a revered ancestor, but also regards it as both a lover and a friend:

Dashbalbar was constantly writing about the grass, it was as though the very touchstone of his relationship with the natural world. But the understanding of how grass holds the spirit and the physical remains of ancestors is a powerful way of honoring simultaneously the land and the ancestors, and it is this understanding which Bavuudorj has also come to express in his work.
What is especially interesting, in my opinion, about Bavuudorj’s perception of the grasses is that, whereas Dashbalbar describes the grass in relation to himself, Bavuudorj goes one step further, and explicitly gives the grass a life of its own, as we read in “Desire:”

The women are changed
into flaxen grasses.
Out comes the moon, and
sweet memories awaken in them.
Their fragrant red lips
still bear dew,
cast unrestrained
at the golden sun’s kiss.
So it was when they were human.
But the lovely girls
have not altered their desires,
they honor them.
But when I offer
brush and paper to heaven,
I desire the dark winds
to cause the grasses and the girls to fade.

This poem would seem to be a summation of Bavuudorj’s experience of the grass in particular and the natural world in general. Women become grasses and are transfigured by the moon, revealing their human origins and revealing too that their human desires remain, despite their transformation.
So deep an understanding of the (apparently) secret life of nature is not, of course, unusual in poetry. What is unusual in Bavuudorj’s poetry, and especially in relation to his contemporaries, is the intimacy which he creates. In Bavuudorj’s case, this intimacy, I believe, comes as much from what we might loosely call the spiritual as from the Mongolian poetic tradition. There is an animistic aspect to Bavuudorj’s work which recalls the shamanic tradition which is so intrinsic to Mongolian culture, and in which his mentors Dashbalbar, Nyamsüren and Mend-Ooyo were equally steeped.
The interaction of shamanic and Buddhist cultures is so integral a part of the Mongolian experience, and of Bavuudorj’s experience, that we cannot read his work without at every point acknowledging this influence. But Bavuudorj has an unusual and highly personal expression, through which he conveys both his own understanding of the world and the world’s understanding of itself.
That the world grows over time to understand itself through contemplation sits at the center of Buddhist practise and at the center of Bavuudorj’s poetry. The situations which he describes – a monk shrinking his body through meditation, an elephant moving through the universe, human beings transforming into blades of grass – inhabit a world of dream and vision, a world in which the collapse and twist of time and distance transmutes the mystical and the concrete, revealing the universe as a place of physical and spiritual activity. In presenting his experience and that of the universe in such a way, Bavuudorj is adding to the Mongolian tradition an aspect both personal and surreal, an aspect which bespeaks an original vision and an original voice, and it is this vision, this voice, which has made Bavuudorj one of the most important and influential figures in contemporary Mongolian literature.

Posted by Bavuudorj at 8:27 PM

Labels: Review and critics on my poems 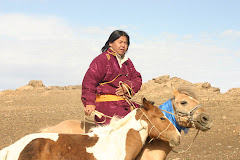 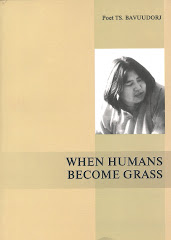 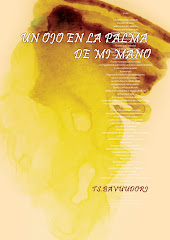